And that is why the New Republic Blows

There are days (weeks, months) when being a lady writer of the political sphere is, well, less satisfying than being a 50's housewife. Between the Nobody Gives A Fuck What You Have To Say On The Matter Little Lady and the "shut your mouth and spread your legs" comments, scrubbing floors in high heels and having a daily valium/cocktail habit seems downright peaceful. And that's the point. So when I see that the fucking editor of (supposedly liberal) The New Republic saying that us ladies are less socialized to produce and consume opinion journalism, I wonder what the fuck have I been writing for the last 5 years, recipes (ok yeah, there are some recipes). What the fuck have you all been reading for the last 5 years? What the fuck? Perhaps if these douchenoodles (in publishing, which is suffering right now due to the interwebs) stopped with their self-fulfilling prophesy bullshit (if you only have men, writing for men, about men, why the fuck do I need to read your shit?) and tried remembering that there's 51 percent of the population they are ignoring in their quest for the dudeliest of dollars, they might, I dunno, produce better media. Shit people actually want to read and watch and buy. But what do I know, I'm a lady who hasn't been socialized to produce or consume opinion journalism. 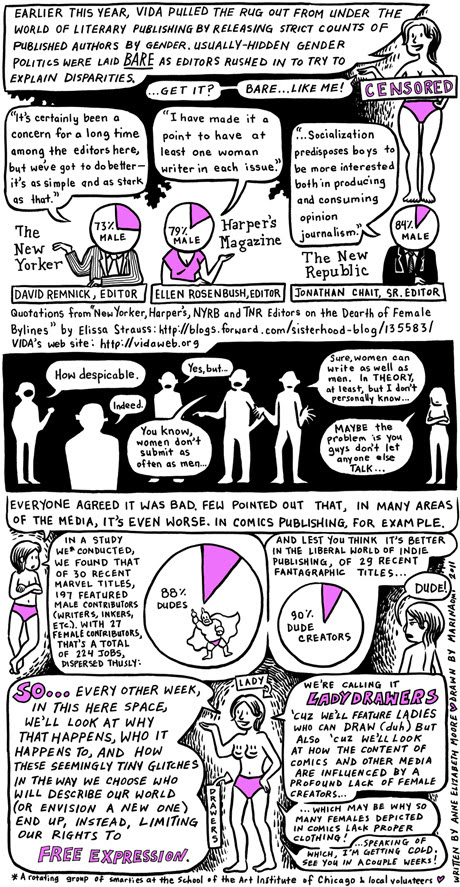 h/t Feminist Philosophers
Posted by The Red Queen at 5:58 PM No comments:

Remember how we gave Banksters boatloads of cash

So they wouldn't tank the economy and would keep the money flowing to the economy would remain dynamic and blah blah blah.....

Of course the biggest Bankster of all, Bank(sters) of America, is going to lay off 30,000 people rather than eat the cost of making bad loans.

Lemme see if I remember Econ 101. Entrepreneurs get profit and interest because they take risk, while us little peons only get wages because we don't take any risk (cough). I think it was the BofA employees who took the risk of  being employed by a shady fucking organized crime racket, not the organized crime racket itself.

And while we're talking risk, I fucking called it a year ago when I said the securitization of life insurance policies would mean that the Kleptocrats would push for ways for us to die faster so they get better payoffs. Look for a great big life insurance marketing push in the same vein as the "ownership society". Shit, I just got life insurance through work. This is not a coincidence. I am now officially worth way more dead than alive.

Fuck the rich. Fuck the kleptocracy. Fuck all them fuckers.

10 years a long time. Of course we've been engaged in perpetual war since then, so it's even longer for the men and women who are keeping America "free" by being sent to occupy other countries. I find myself often asking if things are really as different now as they seem, or if it's just that I've had the wool removed from my eyes. I am not sure of the answer to that. But regardless, the world that we find ourselves in now is, to put it bluntly, horrible. And, in very blatant ways, the terrorists won.

We now live in a world where the act of getting on an airplane is considered criminal enough that we forfeit our rights against involuntary search and seizure. Big ole trigger warning on the link, btw.

We live in a world of extraordinary rendition, though I am not sure we haven't been doing things like that for a long time.

We live in a world where a Democratic (ha!) President renews and expands all the horrors of the Patriot Act.  And the rabid Obots ignore and ignore and ignore. Assassinating American citizens in the way we've always assassinated non-Americans is now considered solid anti-terrorism policy.

We live in a world where the cruelty done to the poorest and weakest of us by that same Democratic President and the Republicans who help him, make the Republican Revolution of 1995 look like a fucking cakewalk.

The list could go on and on. But the biggest take away is we now live in a world of unending fear. Fear of violence from the state. Fear of abject poverty. Fear or religious zealots (both Christian and Muslim and and and and and). All fear, all the time.

That's how the terrorists won.