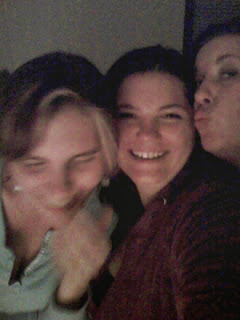 The Red Queen sandwiched between her friends Amanda Panda and Ms. J. For the record, nearly every picture of Ms. J and me has her making smoochy lips at me.
I've been musing over the nature of compliments versus harassment lately. The two lovely ladies with me in the photo above have given me some insight based on incidents that have happened over the course of several drunken pub crawls in Belltown. We came to the conclusion last night (after drinking many red stripes and coming up with the new name of a coffee drink shot full of vanilla stoli and goldschlager- the stolengolencofffee!) that it is a matter of payment.

Lemme splain. A few weeks ago we were at the same bar when we were followed, harassed and pestered by this one guy. He took turns "complimenting" each of us, trying to see which one of us had self esteem so low that we would trade a few comments about our looks with the removal of our panties. Some of his words were just obvious BS about how important he was. You know, typical drunken cock swagger and a bunch of big fat lies about where he was from - South Africa, Jamaica, Ethiopia, he was a US Marine in Iraq, he was from New York. Blah blah blah.

Now let me get to the line that cemented the difference for me between a real compliment and creepiness- "You're beautiful". (Pauses for many moments to figure out how to write the next bit without sounding like a super conceited piece of shit.........)

I get told this alot. I am not, by any means, conventionally attractive. I am a big, curvy girl. I look nothing like what beautiful is "supposed" to look like. Yet, on a fairly regular basis random strangers will tell me I am beautiful. Sometimes it is a genuine compliment and I take it as such with a thank you, but the guy at the bar was not doing that.

What the guy at the bar was doing was almost the reverse version of a neg- pick a girl whom you assume does not get a lot of compliments and try to buy her favor. I've been trying to figure out specifically for weeks what the difference is between a creep and not-a-creep and how it is that we know the difference without being able to explain it beyond "he was creepy". I think it lies in whether the compliment is genuinely given or whether it is given with the expectation of payment.

More examples, cause I like them. Women can give these kinds of compliments all the time to each other. Last night I told the girl sitting at the table next to us that she had the most beautiful curly hair. Ms. J oohed and awwed over another woman's fabulous boots. I did not expect anything from the girl with the gorgeous hair, I just wanted to tell her I thought it was awesome. Ms. J did want to check out the woman's boots, but only if the other woman wanted to show them off. There was no expectation that since Ms. J had given her a compliment the woman then had to hand over her leg so that Ms. J could get what she wanted. Ms. J did ask if she could touch them (they were this very tactile looking patchwork that could have been leather or fabric) and the woman let her. Had the woman said no, Ms. J would not have felt like she had paid out a compliment for no gain.

One more example. In a cab on the way to work the other day I struck up a lovely conversation with the driver. I live in a neighborhood with a large number of Ethiopian immigrants (yay- this means I also have many yummy Ethiopian restaurants within walking distance) and a lot of the cab drivers are Ethiopian. The driver and I were talking about kids and marriage. He's 40ish, married late in life according to his culture, and has 2 kids. He was shocked that I was only 32 and had a 12 year old and wasn't married (more shocked by my age than by the not married part I think). Then he broke out with the "You are a beautiful girl" but not as a cheesy come on. Actually he was very explicit that he was not trying to pick me up. He was merely trying to explain that if I was as beautiful at 20 as I am now that some of the Kid's dad's idiocy might be explained by raging hormones (there's only a slightly different argument to be made that a beautiful girl is the reason a boy acts like an ass- but that's for another time). Anyways, his compliment was nice and part of the conversation without being a payment for some future favor.

So there it is. 2 guys. Nearly identical words. Neither of them do I have any romantic interest in. It really comes down to the basic feminist idea of ownership of ones own body. The creep assumed that he could buy control over my body by paying me compliments on my looks. The cab driver just gave me a compliment. The creep assumes that women's control over their own bodies is something that can be sold away (and if it can be sold it can also be stolen). I know none of this is really groundbreaking news, but it does help to clarify why behavior that seems exactly the same has radically different results in the way we feel about it.
Posted by The Red Queen at 4:57 PM 2 comments: