A Primer on Free Speech

With all the bust up in the blogosphere over the last few weeks about Shakespeare's Sister and Amanda at Pandagon, I thought it was time to remind a few people what it is that free speech means.

Free speech means that as long as I am not saying something slanderous or threatening, I have the right to say what I want. I can be idiotic, I can be a bigot, I can be a complete and total asshole. But with that I also have to expect that someone else has the right to use their free speech to call me on my assholery.

Unless what I am saying is threatening, I cannot be jailed for what I say.

That said, nothing that Amanda or Shakes wrote was bigoted towards Catholics, but even if they had written something bigoted, the death threats and rape threats that they both received are not free speech.

When this country was still just an idea in a bunch of revolutionaries' heads, Benjamin Franklin printed an ad in the Pennsylvania Gazette for an ocean trip. The ad stated "No black gowns" were allowed. This did not mean that the ladies had to leave their little black dresses at home. It meant no clergy allowed. In the brouhaha that followed the printing, Franklin wrote:

If all printers were determined not to print anything till they were sure it would offend no body, there would be very little printed.

A few years later, in 1735, John Peter Zenger was prosecuted for seditious libel, or for having printed derogatory comments about the government. This is where the basis for our idea of free speech and freedom of the press comes from, so pay attention. Under this law, it was even more illegal to print derogatory truths about the government than to print derogatory lies. The point was, lies could be disproved but printing the horrible truth could not.

Zenger's lawyer argued that printing the truth was more important than protecting the government from public scrutiny. The jury agreed and went against the law and the judge to acquit Zenger.

For us in the here and now, this means criticising the government for it's actions in Iraq is not, in fact, treasonous or traitorous. It means that Joe Wilson's actions in the Yellow Cake debacle were not something that the government could take punitive actions for (like endangering his wife by exposing her CIA status).

Now in the case of the above mentioned bloggers, the screaming meemies on the right were calling for blood because they had been offended by the bloggers' opinions.

Let's make a big distinction here folks- opinions, whether you agree with them or not, are not facts. They are hopefully based on facts (not always- see Bill O'Reilly). Opinions can be agreed with or disagreed with, but having a different opinion from someone else does not give you the right to threaten them with harm.

Fact (or truth): Numerous Catholic Priests in the United States were child molesters and there is evidence that the Catholic Church hierarchy used measures to hide this from their parishioners.

This is a fact because it has been proven, repeatedly, in a court of law. There is evidence to back it up and court decisions to support it.

Opinion: I think the Catholic Church hierarchy is a slimy piece of work for having risked the children in their parishes rather than deal with pedophile priests.

This is opinion because it is what I think. If you disagree you are free to state an opinion to the contrary- maybe you want to say that "Those children were blessed by the priests' hot sticky love fluid and should shut their pieholes".

It's just too bad your mother didn't abort you. You are nothing more than a filthy mouth slut. I bet a couple of years in Iraq being raped and beaten daily would help you appreciate America a little. Need a plane ticket ?

This is a threat because this person has stated that Amanda should be raped and beaten (both things are illegal- for those too ignorant to know)and the oh so literate author wants to helpcommit those illegal acts by sending her to a place where she will be raped and beaten.

Nowhere in our constitution does it say that if you have offended me with words that I have the right to escalate the fight into physical violence.

Nowhere in the constitution does it say that you can counter someones opinion by threatening to commit illegal acts.

Nowhere in the constitution does it say that there is a right to not be offended.
Posted by The Red Queen at 2:51 PM No comments: 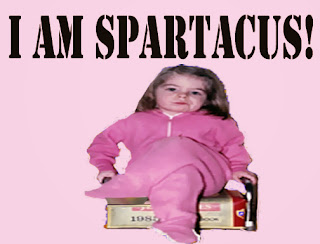 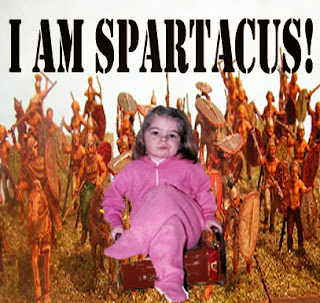 Two different t-shirt designs are now up here.
All profits will go to Shakes to offset the job loss.
Posted by The Red Queen at 5:10 PM 6 comments:

In 1933, the Nazis took control of Germany with only 37% of the vote. Obviously, they were not the majority voice of the Germans. But most of the Germans that didn't vote for Hitler kept their heads down and their mouths shut. Maybe in the privacy of their homes they would disagree with the new image of Nazi Germany, but the majority did not fight agaist the hate mongering.

So here and now, in the begining of the fundamentalist takeover of our country, it is up to those of you who would be good Germans to stand up and say "This is not my God, this is not my religion, this is not right!"

Jovial- I am not the person you need to fight on this. I am not responsible for the fact that the religion you claim has taken a turn for the crazy. I am responsible for calling them on their crazy, but you are picking the wrong fight. I am more than willing to help you fight against them.
But I am not the enemy to your beliefs, I am not the reason that those of us on the side of ration and reason are disgusted by the screaming biggots in priest's robes.

By keeping your head down, or by picking the wrong fight, you do no help to fixing the image of Christians as extremists.

Go fight the actual extremists.
Posted by The Red Queen at 3:14 PM 9 comments:

I am Spartacus too!

With much love to girls who kick ass with their keyboards of steel.
May the nutbags who torment you spend eternity watching John Stewart make fun of them.
Posted by The Red Queen at 1:35 PM 3 comments:

Why Christians bug the fuck out of me

Below are just a few choice quotes from emails sent by supposed "Christians" to Amanda Marcotte of Pandagon. It's soooo refreshing to hear them spew out how they really feel, and their choice of words is exactly what i think Jesus would have said. Oh wait, no they aren't.

Problem with women like you, you just need a good fucking from a real man! Living in Texas myself, I know you haven't found that real Texan yet. But once your liberal pro feminist ass gets a real good fucking, you might see the light. Until then, enjoy your battery operated toys b/c most real men wouldn't want to give you the fucking you deserve b/c the shit that would come out of you ears.

i like the way you trash talk i don't particularly want to have sex with you but i would like a blow job.

It's just too bad your mother didn't abort you. You are nothing more than a filthy mouth slut. I bet a couple of years in Iraq being raped and beaten daily would help you appreciate America a little. Need a plane ticket ?

YOU RACIST WHORE. FAT UGLY BITCH. SUCK MY LONG COCK ASSHOLE I HOPE YOU KIDS NEVER LIVE AND YOUR PARENTS DIE A TRAGIC DEATH YOU ASSHOLE BITCH!
I HOPE YOUR WOMB IS BARREN AND YOUR CAREER PLUMMETS TO HELL YOU BITCH
Posted by The Red Queen at 7:35 PM 4 comments: