For all the immigration haters 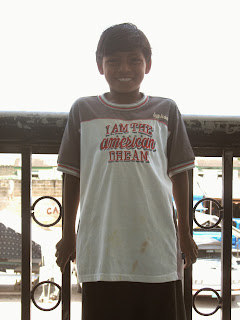 I took this picture in Belize last summer. After I saw his shirt I asked the boy if I could take his picture while we were waiting for breakfast. Afterwards he went off and found his friend to tell him about the "Picture Miss" who took his picture. As we were leaving to catch a bus back to Mexico, the boy and his friend climbed on the top balcony and started yelling "Picture Miss! Picture Miss!" and asked me to take a picture of the two of them together. 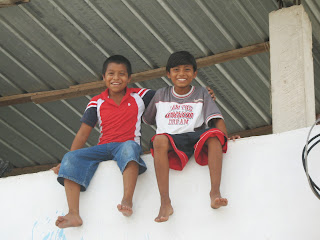 Seriously, could there be any cuter reason why immigration should be a good thing?

Wherever we went in Mexico- if there was sign in English then there was always a serious typo. This one has to be my favorite. 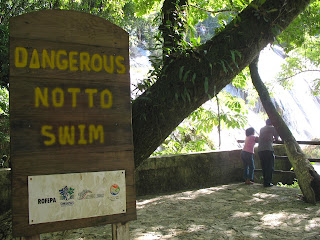 This sign is at a series of 3 waterfalls- this is the smallest. 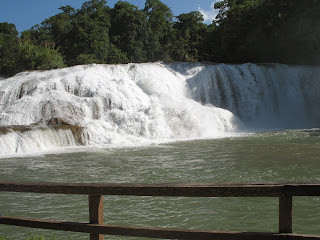 Posted by The Red Queen at 5:16 PM No comments:

Andrew Leonard of How the World Works thinks that Bill Clinton would make a fine replacement for Wolfowitz at the World Bank.

I second the idea!
Posted by The Red Queen at 9:59 PM No comments:

John Edwards makes me squishy inside

So I am coming out as a great big Edwards supporter, and not just because Wonder's mother (my favorite Aunt) says that we are distant cousins to him.

Let's see some recent Edwards quotes- shall we?

"The war on terror is a slogan designed only for politics, not a strategy to make America safe. It's a bumper sticker, not a plan....It has damaged our alliances and weakened our standing in the world."

"I believe that couples in committed, long-term relationships should have the same rights, benefits, and responsibilities, whether they are straight couples or same-sex couples. I support civil unions to guarantee gay and lesbian couples the same rights as straight couples, including inheritance rights, hospital visitation rights, equal pension and health care benefits, and all of the 1,100 other legal protections government affords married couples. I support the repeal of the Defense of Marriage Act provision that prevents the federal government from recognizing same-sex relationships. Gay marriage is an issue I feel internal conflict about and I continue to struggle with it. However, I believe the right president could lead the country toward consensus around equal rights and benefits for all couples in committed, long-term relationships."

"Washington failed America today when Congress surrendered to the president's demand for another blank check that prolongs the war in Iraq. It is time for this war to end.Congress should immediately use its funding power to cap troop levels in Iraq at 100,000, stop the ongoing surge, and force an immediate drawdown of 40-50,000 troops, followed by a complete withdrawal in about a year.The American people's call for a new course in Iraq was not answered today, but Congress still has the power to end this war. Our security and democracy alike demand it."

So he calls Bush out on his "War on Terror" propaganda, doesn't think the Dems should have caved in the Iraq spending bill, thinks everyone should be able to get married, wants Universal healthcare, and is the ONLY ONLY ONLY candidate to talk about poverty without just a glancing 'poverty is bad' stance.

Not to mention that anyone smart enough to get Elizabeth Edwards to marry him is an impressive dude indeed.

I am casting my vote for Edwards. There is still the chance that Gore might get into the race, and I will admit that I would be torn between the 2. But Edwards is proving himself to the kind of outspoken leader we need to rebuild after 8 years of Bushco plundering.
Posted by The Red Queen at 5:18 PM No comments:


Keith Olberman- he's all real and I have a crush on him too.
Posted by The Red Queen at 4:38 PM No comments:

Imaginary people I have crushes on......

Sendhil Ramamurthy plays Dr. Mohinder Suresh on Heroes. I have a big squishy weak spot for hot indian boys and he hits that spot, hard. Whenever the kid and I watch the TV show together, the kid spends the commercial breaks teasing me about my love of the hot doctor and how I want to have a hundred of his babies and I spend the rest of the show making heavy sighs like a 15 year old in lust.

This is Mercedes, the rebel maid, from Pan's Labyrinth. She makes me happy that same sex marriage is now legal in Spain. At first I thought her brother was awesome (being a hot guy fighting the good fight against the fascists) but Mercedes is the real hero of the story.

This is Clive Owen playing Max in the movie Bent. For a movie about the treatment of gays by the Nazis, it is a hard movie to watch, but it does have the best no sex sex scene in the history of movies (that is if watching two guys makes you happy and I am lecherous enough that it does, thank you very much).

Rachel Weiss as Tessa Quayle in the Constant Gardner. I love her fearlessness and generosity.
Posted by The Red Queen at 4:49 PM No comments:

I am, as most of you know, not the kind of girl generally struck mute the stupid actions of misogynist boys. There’s enough pissed off righteousness in me to call out egregious actions for the benefit of any other girl in a 1000 yard radius, But lately I have found myself unable to call out a certain behavior that pisses me off to no end- the Look Up.

The Look Up is when a boy takes that 30 second long look at you starting with your legs and ending at your tits. They never, ever look you in the eyes until they’ve finished their examination and decided that you are a fuckable object. Maybe you guys think this is flattering, but it’s creepy.

You boys may think that this is basically harmless, I should feel flattered to get the attention, maybe just write it off as a socially awkward moment with a guy who has no idea how to get a girl. But that is not how it feels on the receiving end.

The Look Up makes me (me of all fucking people) feel like a powerless hunk of meat. Calling out a boy who is yelling stupid things on the side of the street is easy, but telling someone to stop looking at you is different. Without saying a single word these boys put you in your place and keep you there until they are finished. It doesn’t matter that you weren’t looking for attention, or that you are trying to do other things, or that never in a million years would the boy who is doing the looking get to see you naked. It doesn’t matter that you are just trying to buy groceries for dinner with your kid standing right next to you. You have no choice but to let the guy take a full mental image of you. It feels like you’ve been turned into wank-fodder against your choice.

And what the hell can you do against someone who is “just” looking at you. Someone who is willing to block your path or corner you in a spot that you can’t leave while they take their visual fill has already demonstrated that you don’t matter and calling them on their behavior feels more dangerous than telling the stupid cat caller that he’s an ass.

I’m not saying you shouldn’t notice attractive people. I do that all the time. But I have never interrupted someone else’s day so that I could get my visual kicks. I have never impeded someone’s movement. A Look Up involves making sure the person you are looking at knows that they are being looked at and can’t escape it. That is not flattering, it’s just one of the thousand ways woman are treated as objects instead of people.