This is what happens when you're poor

Reading this is triggery if you are sensitive to blood and surgical stuff. It also made me cry.
Posted by The Red Queen at 8:01 PM No comments:

if during any of the gasbagging going on as part of the War on Women! why no one has asked if Newt and Calista used birth control when they were fucking behind Newt's wife's back? Or did he just pull out and spooge allover. He seems like the type to make a mess and leave a lady to clean it up.

Or maybe he had a vasectomy? How did that go over when he converted to Catholicism? Would he have to get it reversed because every sperm is sacred?

Has anyone asked Mrs. Frothy Mix if she used birth control with the guy she was living with before Mr. Frothy Mix? You know, that guy who performed abortions for a living? Did she have to convert to Catholicism to become Mrs. Frothy, or was she lapsed? If she was lapsed, why wasn't she excommunicated for fornicating with an evil-doer in the eyes of the church?

And the Romney's- well they've been married for fucking ever. But their last child was born when Mrs. Romney was only 31. Now granted, 5 kids in 11 years is a fuck of a lot of kids in a short time span and I wouldn't want to keep popping 'em out, but last I checked, ladies don't normally stop being fertile at 31. (I'm fucking 36 and it worries the fuck out of me that I might end up preggo even though I haven't missed a single pill in 7 fucking months straight.) So how did Mrs. Romney get blessed with super-fertility for the first 11 years of marriage and then no fertility for the last 30 years? Even menopause only knocks off a decade or 2.

The point to all this speculation about the family planning practices choices of a bunch of slimeballs in tacky blue suits and their other halves is that they are all GIANT FUCKING HYPOCRITES when it comes to dictating what choices the rest of us have available.

And truth is, I don't really give a flying fuck how they prevented pregnancy, or didn't prevent pregnancy, or what their fucking church has to say to them about family planning. But they sure as fuck are invested in getting to browbeat me with some fake book their skyfairy allegedly dictated when it comes to my choice. And if I have to listen to their shitty sermons (and pay out of pocket when it comes to birth control or abortion, even though I have kickass health insurance because their godbag says "ewe lady parts groooody to the max") then their own practices are up for debate. Don't want to admit that you used some kind of birth control, then don't take the ability to use some kind of birth control away from others.
Posted by The Red Queen at 11:41 PM No comments:

Radical Thought for the Day

Well not just today. It's a longheld belief of mine, being a structuralist at heart.

Religion and politics are structures we created to corrupt things people are perfectly capable of doing on their own, without hierarchies.

For those of you who are believers- do you really need a man in a glorified bathrobe who stands above you, lecturing at you, to know god? Or does that man, and the man above him, and the man above him, and the funds that must be collected to build the buildings to house the place where the man stands above you and collects money and lectures at you, create a structure that increases the space between you and your deity of choice? Or maybe I've just been soaking in protestant culture all my life and thought Martin Luther was on to something. Maybe I've spent too much time reading about our famous local godbags, the Mars Hill Cult Church, and can't see any benefit from one or a few godly men bullying people because god says he can.

Now politics, we all think we get something out of politics because roads get built or schools get run. That's not politics. That's governance. Politics is taking the power from the people and turning into a game for fun and profit at the expense of the people. That's true, even in a democracy. Politics is the way we choose (or are forced, bludgeoned, tricked, and cajoled into "choosing") who we give power over our lives to. Even democracy, supposedly the most self-regulating of all power structures because us peasants have to option of firing the king(s), eventually breaks down in oligarchy. Like gravity, it is a law. What goes up must come down. What is for the many will be narrowed to the few.

Perhaps Diderot is a bit bloody in his quote (and completely ignores when us lady types will be free) "Man will never be free until the last king is strangled by the entrails of the last priest". After the last week of politicking and religiousizing over women's bodies*, I would toast that dual execution gladly. Let the patriarchy kill itself and it's minions with it.

*FYI- while everyone (with a uterus) was all "Shit look at fucking Virginia and it's rape-o-sound law! Look at all the fucking dudes in tacky blue suits testifying about what god thinks of lady-parts!" Arizona was passing a law that makes it legal for a man or an underage girl's parents to force a pregnant woman to stay pregnant against her will. And if she has an abortion anyways, dude can sue her for damages due to "lost companionship".

On that note, TMI TIME!!!!I had an appointment with the gyno of Valentine's Day (most romantic of all doctor's appointments. I told her that I would have bedazzled the bits or shaved the pubes into a festive shape if I was going to have an exam- but this was just a consult) and I begged, pleaded, damn near cried for her to take out my uterus or sand blast it's baby making properties into non-existence. She wants me to try getting an IUD one more time (round 4- if you're keeping track) and I said I would not do it unless I was given enough drugs to make me damn near unconscious. I had an abortion once where I was given a lovely demerol/valium cocktail and I don't remember a thing. It was, for a surgical procedure, lovely. Gyno (who is supposed to be the best per my regular doc) is consulting with SUPER GYNO! who can bend and twisted uterus to her will. I am doubtful. It's like a bendy straw in there and there is no way to get a straight stick through a u-shaped curve.
Posted by The Red Queen at 1:46 AM No comments:

Jessica Alba in the Fantastic Four

Kate Bosworth in The Warrior's Way 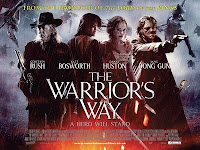 Every single Star Wars movie ever

That's just a wee tiny fraction of the problem.
Posted by The Red Queen at 3:40 AM No comments: