A Hoodie and Mad Cash!

Racist shitfaces hacked (possibly, racists lie) Trayvon Martin's Facebook email and "OMG!!!!! He's got pictures of himself holding wads of cash! He must be a drug dealer!!!!!"

You know what's super fucking funny, I mean nearly made me pee funny? My current Facebook pic is literally me wearing a hoodie holding fat wads of cash, grinning like the Cheshire cat. It's been my profile pic for ages. I must be a drug dealer. When will the Feds by knocking down my door?

That picture, btw, was taken at a friend's birthday dinner after we all kicked in dough to pay the check and cover the birthday girl's portion (Hey Ms. J!!!!) 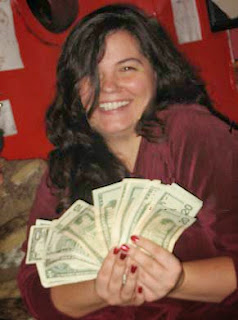 I think Trayvon was just your average kid, posting funny pictures (hell, as seen above even us boring middle aged moms post funny pictures to Facebook- that's why it exists). But even if Trayvon was some kinda marijuana dealing teen entrepreneur, George Zimmerman could not have known that. All he could know was that a Black kid was walking around his neighborhood and Zimmerman didn't like that.
Posted by The Red Queen at 11:13 PM No comments:

You can just google birth control and it magically shows up?

It's so stupid I don't even know which of the shitty Rethuglican's said that.

It's also timely since I got the preliminary statement from the hospital about the cost of my IUD insertion.

Hold your breath kids, it's about to real.

Now this is before my insurance pays its chunk, so I will probably end up paying $650. And this was attempt #4, so there are copays and etc from previous attempts.

All this for 5 to 7 years of birth control and (legs crossed for luck!) period control. I can't do the math to figure out what that breaks down to per year, but we'll go with $100. Which is not bad. But it's super fucking pricey up front, that's for damn sure.

Could Google have delivered an IUD straight to my lady bits? Cause if it could, I would have skipped the jaws of life cervix clamp those 4 fucking times I had to deal with it (That last time was, in all fairness, a breeze thanks to super fucking awesome specialist IUD placing doc. Who listened when I said "Freaked out" and used all the lidocaine in the world before doing anything. Plus mega dose of valium.I love you Doctor P. even when the Valium has worn off. I love you!!!!)

This is rambley. What I mean is if reliable birth control were as easy and cheap to come by as searching Google is, we wouldn't be having this stupid fucking debate all over the country about women's right to health care. There would never have been a "Show your boss your whore pills" bill in AZ. The Catholic shitheads Bishops would have to complain to Google instead of Congress because they can't get their own damn parishioners to follow their own damn rules.

We women (and people with unterii) have gone through no understandable amount of pain and sacrifice and hardship to both not be pregnant and to be pregnant. It's work. It's spendy. It's painful. And for fucking once it would be nice if the be-penised half of the population stood up in a full-throated scream and supported us, instead of (best case scenario) using our lady-bits as a political trump card (cough*Obama*cough) or worst as a torture device (cough*every-last-rethuglican-cough).

But fuck it. I'm good till I am 44. I can outlast almost 2 whole new presidential terms. You all can keep playing stupid asshole games, but my uterus ain't your football no more.
Posted by The Red Queen at 12:43 AM No comments:

Because BLCKDGRD broke my heart today

by informing me via twitter that Jarvis Cocker would be in NYC- the fucking week after I will be there.

I sobbed on my keyboard for a minute.

Posted by The Red Queen at 1:52 AM No comments: