I want that fucking panda!

Posted by The Red Queen at 1:01 PM No comments:

Not only are you the origin of some of the most beautiful people on the planet (huhmmm hot Indian boys) but lately people in your country keep committing acts of violence that I agree with.


First, a bunch of laid off temps went ballistic and killed a CEO.

Then an Indian woman who had been stalked for months beheads the asshole when he tried to rape her.

I know, violence not the answer, blah blah blah (you all know I wanted to be a revolutionary as a kid, is it sooooo hard to imagine that I'd be supportive of these kinds of things.)
Posted by The Red Queen at 6:13 PM No comments:

This is the guy you are supporting

if you even dream of voting for Obama 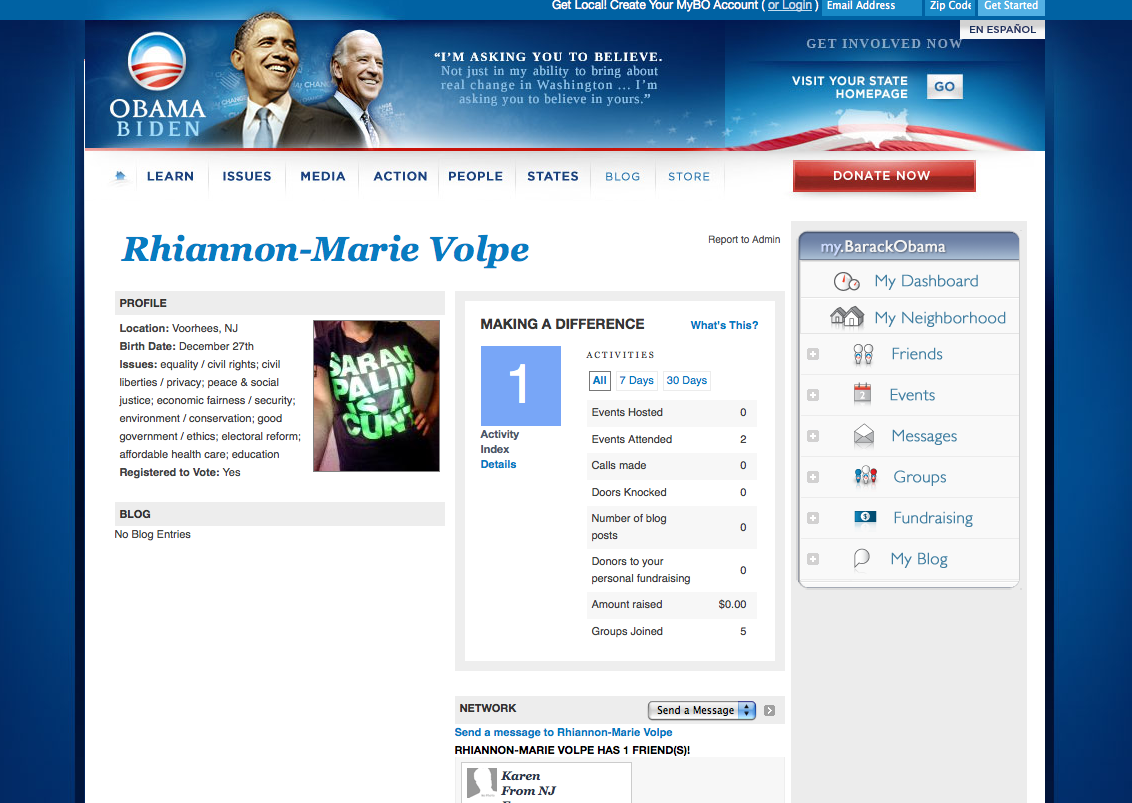 These are the people you are voting for. These are YOUR people. I don't care if you are reluctantly voting for Obama, don't like him but will vote for him anyway just because he has the D tag, etc. By voting for him, you are endorsing and rewarding this behaviour.

By not calling it out and exposing it for what it is, you are accomplices to this attitude. YOU are one of THEM regardless of your motives. Your humanity ends when you accept any part of this. When you reward the behaviour and the mentality behind it with votes, you are one of them.

And don't give me the crap about "Obama cannot be held responsible for his supporters' actions". Yes he fucking is, because he hasn't denounced it, because he profits from it, because he is where he is now because people like YOU allowed him to get away with the mysoginy. If you lay with the pigs... and all that.

Posted by soopermouse at 4:43 PM No comments:

To be a little less pissed off about which asshole ends up in the White House, Obama brings the finger wagging.

So McCain- still an asshole, always an asshole. But Obama never misses an opportunity to be the disapproving school marm. In talking about the abysmal state of the US educational system, I actually like Obama's plan for $4000 per year for college in exchange for community service. But he just can't quit there.

But there's one last ingredient that I just want to mention, and that's parents. We can't do it just in the schools. Parents are going to have to show more responsibility. They've got to turn off the TV set, put away the video games, and, finally, start instilling that thirst for knowledge that our students need.

Seriously! Yes it's us lazy parents who are teaching our kids that "learning is for suckers!" Perhaps having to work 2 or 3 jobs to keep up with housing and insurance costs (which your economic plan doesn't actually help with) means that parents have less time to spend with the kids. But the problem with the educational system is not lazy parents, it's CRAPPY FUCKING TEACHING METHODS. And that has nothing to do with teachers, it's how teachers are supposed to teach here. The same information taught over and over and over with just the tiniest bit of additional knowledge every year does not make smarter kids. It makes bored kids. It makes under-educated kids. And piling on 3 or 4 hours of homework per night to make up for the time spent on repeating crap doesn't help either.

I may have yelled "Oh Fuck You!" very loudly at the tv (from the other room) when I heard him spout that shit.
Posted by The Red Queen at 12:46 AM No comments:

On our way to the grocery store (Whole Foods, sad but true)

Ruth (noticing bumper stickers on car in front of us): Someone's in a PETA car

Me: PETA is more misogynistic than Focus on the Family, I swear to god.

Me: At least Focus on the Family admits they think women are inferior, PETA can't understand why we take offense when they say women are a better source of dairy products than cows.
Posted by The Red Queen at 12:49 AM No comments:

More proof that El Nino is in fact coated with evil

the Kid has been wandering around singing "Snape, Snape, Severus Snape" for days. And I just watched the video that it came from.

Posted by The Red Queen at 6:17 PM No comments:

The no longer little germ factory formerly known as the kid has given me a very nasty cold. I think my head is gonna explode from all the snot.

Kid will now be known as El Nino, since he has the destructive force of a major weather system.

Please talk amongst yourselves while I slink off and die.
Posted by The Red Queen at 4:58 PM No comments:

Cause Sooper Nagged Me

I read this story the other day and meant to blog about it, then up in gmail chat pops a link. Thanks Sooper. I lurves ya.

So a 15 year old girl takes naked pictures of herself and sends them out, like a dumb 15 year old might.

Now what do you think happens next. Do her parents find out and banish her from all technology usage till she's 30? Do her friends mock her? No

She gets charged for child pornography, essentially she is charged with abusing herself.

It's like the most bizarre version of a Victorian punishment for onanism. Heaven forbid this girl might have some kind of sexual agency of her own. We can't have that now can we? NnnnnnnnnnnnnnnnnnnnnnnnnOOOOooooooooooooo

She is being a dumb teenager, I give you that. But we were all dumb teenagers at one point (hell, I was the cheerleader who sold acid, and someday I might tell you all about my underage drinking ticket). But prosecuting someone for taking pictures of them self is about the stupidest thing ever. Dear gawd, I am sure there are dozens of photos of young boys mooning cameras for a laugh, where is the child porn charge there? How about naked babies in bathtubs? Every parent has one of those (at least- my Kid was such a little nudist that getting a picture of him wearing clothes was a rare thing).

I am a parent. And I am just as freaked out about the nasty pervy abusers out there as the next mom. But a 15 year old girl is physically incapable of sexually abusing herself. There is no power imbalance or coercion or force. There is no lack of consent or need for consent for that matter. You ONLY need consent when there is another party involved.
Posted by The Red Queen at 1:29 AM No comments:

October 18th is to be "Tell the sexist boy bloggers to shut up" day.

Everyday here is tell the sexist boy bloggers to shut up day, but perhaps a more organized form of attack is advised.

Ideas? Do we troll the sexist blogs with inane and repetitive comments? Do we flood them with links to previous posts about the stupidity of sexists pretending to be progressives? Do we just drop helpful links to the Feminism 101 blog?

What are you going to do on October 18th? Actually I think we should rename it Shut Your Pie Hole Day, but them I am not a very nice person when it comes to loudmouthed idiots.
Posted by The Red Queen at 10:20 PM No comments: