"I haven't been convicted of anything, and I am being treated as a criminal"

Congratulations Mr. Roeder, you've just joined the ranks of douchebags like Hans Fritzl who cannot understand why they are being punished for committing a crime.
Posted by The Red Queen at 7:01 PM No comments:

PETA now stands for People who are Ethically Tantamount to Asswipes

That is all
Posted by The Red Queen at 9:53 PM No comments:

There are very, very few black and white issues in the world

Most things are a spectrum of grey. Politics, economics, environment, even free speech all have a grey scale.

But there is one that is soooo black and white, either good or bad. And it's the one we have the most trouble with.

Bodily autonomy. The idea that any and every single person on the planet has the right to do with their own body whatever they want, so long as it doesn't harm another living, autonomous human being.

This idea that ownership of ones body is flexible is the reason for drug laws, prostitution laws, abortion laws, slavery, the prison system, torture, rape, executions, child abuse, domestic violence, human trafficking, "honor" killings, and a whole host of other horrific things. We come down hard on people using their own bodies for survival (prostitution) or self medicating their own bodies in the only way they can (drug abuse) while ignoring or excusing the thousands of ways we allow people to abuse another body with violence, abuse or exploitation.

You either believe that your body is the one true thing that any of us ever get to own in this world, or you don't.

It is the most basic of property rights. You don't have to be rich, or have good credit, or be educated, or straight, or white, or male, or able-bodied, or even an adult. As soon as you are born, as soon as you no longer require another person's body as a life support system, you have the right to your own body. But before that, you are relying on the good graces of your mother, because she gets the same rights to her body as you get to yours, once you are born.

But they almost never apply those same justifications to themselves. For whatever reasons, they believe that they are more autonomous than others.

I've been watching a lot of crime tv lately. I saw (back to back) a show about Fritzel, the fuckwad in Germany who held his daughter in the basement for decades, and another show about a rich American who also held several different women in an underground dungeon for years at a time. Neither one of them thought what they were doing was wrong. I saw another guy, who raped his stepdaughter, who didn't think he was as bad as his cellmate. What he did was okay, but his cellmate raped little boys and that was really wrong.

And I think about the talking heads like O'Reilly, who spout off venomous attacks on others, inciting violence and even stalking opponents. They don't think what they are doing is wrong either. Because, just like those horrible men mentioned above, they believe that some bodies are not fully autonomous.

But they are just trying to find a shade of grey in a black and white issue, and there isn't one. Ever.
Posted by The Red Queen at 7:03 PM No comments:

You'll all thank me for this later

Or more inappropriate conversations with the Kid

Last night, coming home on the insanely hot bus. Kid gets the window seat and then proceeds to do the dudely spread leg sitting position that pisses off female mass transit riders world wide.

I asked, repeatedly and nicely, for him to scoot over so that I'm not falling in the aisle. It works for a minute, then he forgets.

"Okay kid, either you sit nice and share the seat or I get the window side".

So I broke it down and told him the truth.

"The only people who get to sit like that are guys with watermelon sized private parts. Guys who sit like that and aren't packing a watermelon just piss off women. We all know that sitting all spread eagle is a cover up for tiny bits".

That worked.
Posted by The Red Queen at 5:12 PM No comments: 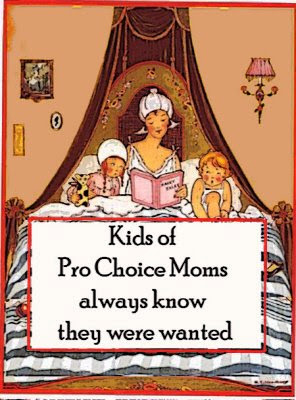 (my cafe press shirts with this on it are still available here, btw)
Posted by The Red Queen at 7:37 PM No comments:

A language lesson for wingnuts and deniers

Since there seems to be a shit ton of denial going on as to whether the assassination of Dr. Tiller was a terrorist act or not, I thought it's time to clear up some things regarding the definition of terrorism.

the systematic use of terror especially as a means of coercion

and the definition of terror is:

1: a state of intense fear
2 a: one that inspires fear : scourge b: a frightening aspect
Posted by The Red Queen at 2:25 AM No comments:

If they are really pro life

then why do they celebrate killers? Or threaten clinic workers. Or bomb clinics and shoot doctors and post home addresses so that other people can do violence?

If it is all about the babies, then why don't they adopt them? Or make sure that their are support services to make it easier for their moms to keep them, or advocate for universal health care so they can be born healthy?

If they aren't trying to control women's bodies, then why do they lie about birth control? Or rip out IUD's without consent? Or block access to clinics? Or eliminate funding for family planning? Or forbid even talking about abortion if you want governmental funding to deliver healthy babies?

Why do they treat children as a just punishment for having sex? If they love children so much, why would they want those children to be born to mothers that don't love them or can't care for them?

The bible, which most of these people claim to follow, says "Know them by their fruits".

Their fruits are rotten.

You cannot negotiate with people who are not acting in good faith. Lying about their goals by claiming to be pro life is bad faith. They aren't concerned with saving lives. Actually, without birth control and abortion the maternal death rate would sky rocket.

So why does our president keep giving credit to liars and terrorists when he says that abortion isn't really about a woman's right to control her own body?

Rest in peace Dr. Tiller. You were a braver person than most of us can ever hope to be. Your tragic end shows them for what they are, murderers and misogynists and terrorists.