First- I climbed this all the way to the top 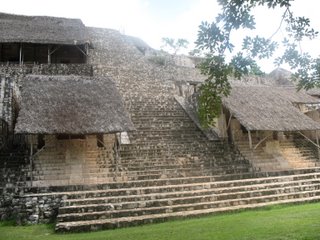 And this is what it looks like from the top. 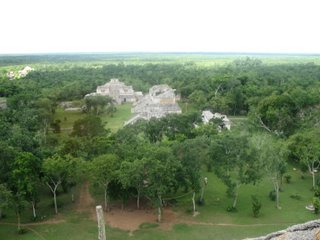 And this is turtles having sex 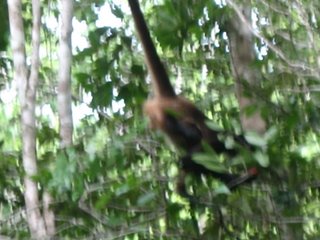 Posted by The Red Queen at 1:39 PM No comments:

My hooptie is better than yours 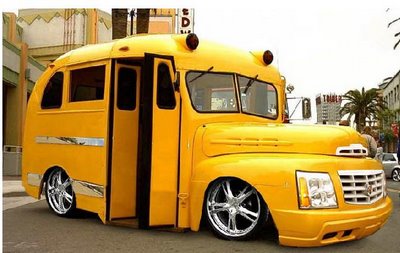 May I present for your viewing enjoyment- the pimpalicious, bling-bling, ghettofabulous short bus.

Now I must sing about it to the tune of "My Milkshake" by Kellis.

Yes, I intend this to be a controversial post, justifying my reason for waiting for RQ's return.

The White Papers has glanced at the role of beauty in today's society, but never discussed it in depth. Beauty has played a role throughout history and continues to dominate our public life. I don't have any specific numbers, but I am certain that the cosmetic industry makes billions in profits. Fashion drives much of the marketplace all over the planet, from stores to magazines to an entire industry of models, hairstylists, hairdressers and the like. Like it or not, the desire to be beautiful is a stalwart of our economy.

Here is where the controversy comes in. Though men certainly do their share (more on that later), women for the most part consume the products offered. Women support a system where similar clothes (or ones that use even less material) costs more than what men pay. As uncomfortable as high heels may be, very few men wear them. And yes, men still generate toward and give favor to women they deem more attractive. Yes, some women try to make themselves less noticeable for their looks, but their efforts will hardly prevent some women from using their looks or men rewarding them for looking like they desire them too. Women now outperform scholastically, and one may surmise, in the workplace where the demographics are even (though the money is still not there).

This is where it gets a little dodgy. Though women can hardly be considered fuly responsible for their consumption, most cosmetics are made from some pretty nasty chemicals. No American companies make bras anymore, an extension of this fact suggests that the conditions under which they are made are less than desirable (and likely exploit women more than men). High heels, as sexy as they may be, displace the hips and alter ankle structure.

So what is the answer to beauty? Do men, who encourage women to look the way they do (some go further by purchasing breast implants) play an equal role in encouraging the beauty and fashion industry. If high heels are so bad (a common complaint), why do women still wear them? It really sucks that an attractive female (and sometimes males) get hired for positions solely for their looks. Yet, in many ways women still use their "power" to get what they want. Also how do we feel that stripping and prostitution, vocations based mostly on appearance, are the only ones where women make more than men? (Thanx, RQ for that fact).

Obviously, women are not solely responsible for the role beauty plays in our society, but they do possess, and inscreasngly so, the power of the pockebook to foster change. But will they use it? How should women see their beauty in light of the fact that they can compete equally with men? And no, I haven't even mentioned the unrealistic standard to which women are asked to adhere (that's up to you).

And yes, I am equally shallow as most men. A beautiful woman, even one way out my league will make me melt. A hottie will make me turn my head on the street. I still look at pictures, music videos and the like that feature unrealistically beautiful women; I am not immune. Nor do I have many answers, but I am sure all of you have a lot to say about this, whether you actually leave a comment or not!
Posted by DeeK at 7:43 PM 2 comments:

Isreal is bombing the fuck out of Lebannon, Castro is on his death bed and Mel Gibson is proved to be an anti- semetic asswipe.

Yet none of these things are even slightly surprising.

I have many stories (and pictures of turtles gone wild) to share with you later, including a fictional tale of revolutionary Zapatista love staring my new imaginary boyfriend, Subcommandante Marcos, as told through post cards.