One of the housemates has a relative visiting this weekend. The relative is more than a wee bit obnoxious. But he's family, so I'm polite mostly.

The Kid and I are having a Buffy-fest (I think it's a great show for teaching sex ed to kids, but that's a post for a whole other day)and the relative showed up in the middle season 5 last night. He sat down on the couch and proceeded to make comments on the hotness of every female actress on the show.

Me: Can we not do the commenting on the hotness of every actress please?

Relative: (in faux-frat boy sliminess) What? Is that NOT ALLOWED in this house?

Me: No. It's just tiresome and boring.

I had an ex boyfriend who used to do this. Watching a movie with him got to be such an exercise in frustration that I often dreamed of duct taping his mouth shut unless he was using his mouth for something interesting. When I complained about his running commentary, his response was "Don't be jealous baby, none of them are as hot as you".

That's not the point, and it's not jealousy or insecurities or anything actually having to do with me that is the problem. It's not my discomfort that needs to be fixed. It's their view that all women are to be judged first and foremost for their fuckablity and that their opinion on fuckability deserves respect. And when it comes to the relative, he thought his comments about hot lesbian love on Buffy should be shared in front of my kid, who I am watching Buffy with so that the Kid learns things like stalking is not the same as love (Spike) and making the perfect woman (Buffybot & April) is creepy and gross.

This isn't to say that finding people attractive is a bad thing. I would watch Clive Owen or Rachel Weisz or Kate Winslet sell tampons or laxatives. And there is a certain chef that Ruth and I both have a mini-crush on 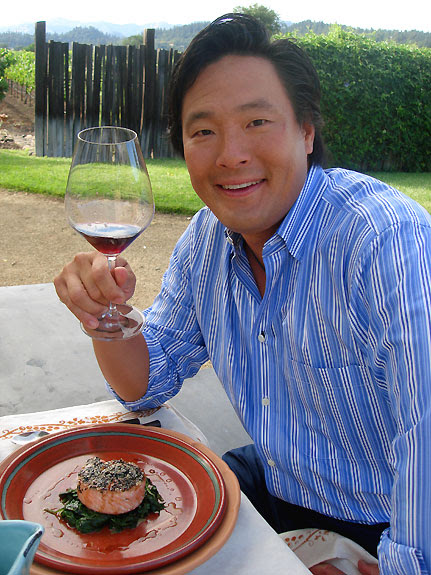 but our opinions on what is attractive is just that. Our own. They still have the right to exist, to get work, to live their lives whether or not we find them attractive. But to the fuckability judges like the relative, people's (women specifically) first and most important job is to make themselves appropriately fuckable. It doesn't matter that in real life a chubby grad student with boy band hair and and way too much bad cologne wouldn't even get an autograph from Sarah Michelle Gellar. It's not his job to be fuckable. It's his job, his birthright even, to decide what is attractive because he is a white dude and his dick rules all.