A little bit of race baiting

The atrociousness of some of the political ads out this election cycle are shocking in their bad taste and jackass style sense of humor, but this blatantly racist ad from Tennessee makes my skin crawl.

See, Harold Ford Jr. is a black man running for the Senate in the south. If he wins he would be the first black senator from the South since reconstruction. So if your an old southern cracker like Ford's adversary, Bob Corker, you get the red-necks in Tennessee to forget that their healthcare has been gutted and jobs are seriously scarce and scare them into thinking the big black senator is going to take their pretty white girls.

Here's some advice for any of the good old boys who really are scared of losing their pretty white girls to someone like Ford- you guys are not losing your girls because of his giant black cock but because he still has all his teeth and bathes regularly. Hygiene will alot further in driving off the big black menace* than voting yet another racist white idiot into office.

* I have no fear of an actual big black menace because I think it's as much a figment of a cracker imagination as the idea that the South actually won the civil war is.
Posted by The Red Queen at 4:35 PM No comments:


since I've been on a feminist rant. I don't know if I can do a whole rant as I am still nicotine free and rants are usually fueled by chain smoking and coffee, so here is a mini-rant with links to make ya puke.

I was cruising google image search for some inspiration. I need to paint and I want to do a big agit-prop piece. I also need to replace a collage that used to live in my kitchen because it now resides in the office window of my anthropology professor. I was thinking of going with a feminist workers theme for the collage and I got some really cool stuff. Then I came across this..... 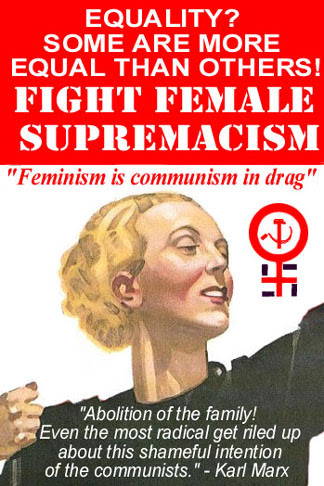 It's from one of those freakish father's rights groups, though this one is Canadian instead of good old red-necked American chauvinism. But it just shows how universal the idea of "scary man-hating feminists" is.

Just to give you an example of the kind of crap these people spew- here is a WOMAN (dear gawd, these let her recover from the concussion she must have received as a result of the obvious dick slapping done to her by the patriarchy) writing about a battered woman who came to her for help.

That's right, Blame the Victim. She hasn't been battered because she asked for it by being a violence prone woman with a need for violence. WTF!

My brain needs to be scrubbed clean now. I feel dirty just for reading this site.
Posted by The Red Queen at 6:11 PM 6 comments: