With all the talk about women and cooking, I thought I would share one of my little secret desires.

After eating my country pork ribs in sticky barbque sauce, my favorite Aunt asked why I didn't go to culinary school and open a restaurant. I don't want the pressure or responsibility of owning a restaurant, and I don't want to spend years in a hot kitchen as some male chef's underling. And I don't want to be stuck in the kitchen. The thing I like best about cooking for people is their reactions to it.

So I love throwing dinner parties. Someone once described my parties as barefoot bohemian affairs with gorgeous food and much wine. That pretty much sums it up. I've had as many as 17 people in my little apartment sitting cross legged on the floor balancing plates of yumminess. I love that.

So when I heard about this Honk Kong phenomenon of "Secret Kitchens" I got all dopey eyed. Instead of running a restaurant, these people throw little dinner parties in their homes for pay. I would love to do the same thing here and I doubt that there is anyone else in the city who can do both vegan and gluten free meals that meat eaters and bread fanatics love.

Unfortunately, I don't think I can charge my friends for eating here and I have no idea how one would go about drumming up customers for a secret business (shhhhhhhhh- don't tell the health inspector).
Posted by The Red Queen at 8:36 PM No comments:

One of the few benefits to being a girl

Kid: Mom, what does emasculate mean?

Me: It means to say or do something to a man that makes him less masculine.

Kid: So can you defeminate someone?

Me: No. No matter what happens, I will always be a woman. But for men there is this silly idea that you can take their manhood away through insults. There is also a word effeminate, that is used to describe a boy who isn't masculine enough. Kinda sucks for you and it's really stupid that the worst insult you can say to a boy is that he's a girl.

Me: Yep. But you know, we don't think there is really any difference between masculine and feminine. Girls can be strong and boys can be sweet. They are both just made up descriptions.

(Why is it that it is so easy for a 12 year old to understand these things, but 30 year old men still think I am going to sympathize because someone called them girly? Seriously, being compared to half the population of the world is not so bad. It's not like someone called you a Bush lover)
Posted by The Red Queen at 4:01 PM No comments:

Sex and the City was a TV show, not an anthropological blue print to the minds of all ladies between 18 and 40. Please stop using Carry Bradshaw references to make your point about wacky single girls. We are not a monolith and we are not all able to be put into Carry, Miranda, Charlotte or Samantha categories.

Unlike the make believe Carry, I cook, fabulously well actually. I know how to make a bechamel sauce from a rue. I know how to do things with fleshy animals that would make your mouth water and your tummy growl. And every girl I know cooks something. But I get tired of cooking every single night. Sure, there may be some girls who don't know how to cook, but most of us single types learn how to cook because we have to. Very few of us have the kind of budgets that make restaurants and take out a nightly affair (especially with the 70 cents on the dollar wage gap).

And Micheal Pollan- STFU already. Has anyone ever noticed that when it comes to improving the quality of life by eschewing modern consumerism that the onus for those corrections is put on women.

Environmental fixes: woman are the ones sorting the trash from the recycling, using craptastic non-toxic cleaners that increase the time they spend doing laundry or scrubbing toilets, hunting down recycled unbleached toilet paper and washing cloth napkins to save a tree, looking for organic cotton t shirts and socks that will very quickly be ruined and/or lost by most children.

And food. When it was slow food, who do you think it is spending all those extra hours in the kitchen making slow cooked soups and sauces instead of opening up a can. It is women who spend the time and effort hunting down locally grown, organic, nitrate free all natural goodness while trying to stay within the family budget (they don't call it whole paycheck foods for nothing). It is women who are required to stay up on the latest whole grain, low fat, high protein, no carbs, good carbs, too much sodium, god fats, transfats, not enough vitamin whatever and don't forget to get enough folic acid cause you might be pre-pregnant bullshit.

And don't even get me started on those stupid Barbara Bush commercials about families eating dinner together. Seriously, if you want families to eat dinner together then make it so Mom and Dad don't each need 2 jobs to pay the mortgage. But the guilt trip about how children suffer when nobody sits down to dinner with them is directed straight to moms.

That is all
Posted by The Red Queen at 9:04 PM No comments:

I'm not the only one!

I was describing to someone this morning why it is exactly that Obama fans piss me off. "They are like those frat boys who listen to Dave Matthews. They think they are being all sensitive and progressive but they are really just over privileged white boys"

But someone at Jezebel gets it! Yay. (Third bullet down)
Posted by The Red Queen at 8:49 PM No comments: 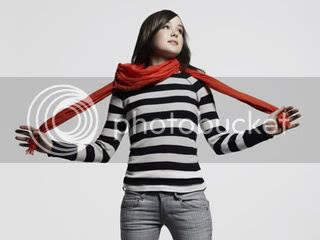 And I want to go first by saying "Fuck Yeah!", after reading this article in the Washington Post where Juno and X-Men actress Ellen Page gave an interiview, and wasn't afraid to use her own F-Bomb:

(emphasis mine)
(I am not going to mention the idiot interviewer asking dumb questions like "Don't all Canadians know each other?".  Moron.)
But I just had to say "Yay!" to Ellen Page, and let everyone know that I have added her to my Girl Crush List.
Also, read that article...because I have to drop another F-Bomb:  Fuck you, anti-choicers!  Juno isn't a "pro-life" movie like you morons would have everyone believe!  Ha!
(I promise I am finished now)
We now return you to your regularly scheduled web-surfing.
Posted by chang'e at 5:19 PM No comments: