Let Them Be Human

This is another of those long rambly thinky posts. These go down best with massive quantities of cheap red wine, so drink up.
At the beginning of the Haiti rescue effort, Auntie Cate and I were watching Sanjay Gupta take care of a bunch of people left in a hospital tent after their doctors had been told to pack all their supplies and were taken away. Auntie Cate said "I'll never say another bad thing about Sanjay, just for staying and treating these people".
"Oh please" I said (in pleading, not sarcastic tone) "let him be human. Let him still be held responsible when he says something stupid".
Then I watched this interview with Kathleen Hanna (who I love love love) and she says "If I am going to be a role model, let me be a really three dimensional role model who, like makes mistakes and learns from them and doesn't do everything right all the time".
Do you all know where my nom-de-blog comes from? Partly it's because I am always wearing something red, even if you can't see it. Right now I am rocking seriously chipped fire engine red nail polish on my toes. The other part comes from the Red Queen theory of evolution. The theory (in a very simplified version) is that species must keep evolving to keep up with a perpetually changing environment and the evolution of other species.
We humans haven't evolved much, at least not in the classic Darwinian fashion, for about 200,000 years. We are physically very similar to our ancestors. Where we can evolve and change and grow is in a Lamarkian sense, consciously through the willingness to try new things and sometimes make mistakes.
So Kathleen Hanna goes on in the interview to talk about how we are in a society where we "kill our leaders", meaning we build them up and then thrash them when they don't conform to our ideals. I've been thinking about that a lot lately. I've been thinking about how Ghandi wrote that the Jews in Europe during the holocaust who tried to escape concentration camps "should have offered themselves up to the butcher's knife". And I've been thinking about this fabulous post by Renee about Nelson Mandela. I've been thinking about the heroes of the Irish revolution, who finally succeeded on the backs of their socialist brothers and sisters at gaining independence, only to turn around and start killing off those radicals who didn't want partition or capitalism to be the price of their freedom.
When we build up people into idols, we remove from them the ability to evolve, to change, to make mistakes. We hold them in a sort of mental stasis that leaves them free from criticism and from improvement, or evolution.
I saw this happen to so many people during the primaries and election, the building up of Obama as a progressive ideal, the perfect candidate. Now that the idealism is a bit tarnished, perhaps we can help the president along in his evolution. But that ONLY happens when we allow for him to be human and make mistakes, and we CALL HIM OUT on them. You cannot lear anything new in a bubble, you have to be willing to take the knocks from the world.
Back to the Red Queen theory for a minute. Have you ever spent years learning a lesson when a 5 minute epiphany would have served you just as well. Like say, years spent with a romantic partner, trying over and over to fix the relationship, only to have a light bulb moment where you suddenly realize "s/he just doesn't treat me very well" or better yet "holy shit, every single time I diet I get fatter!" That's a wee bit like all the running around in circles the White Rabbit does for the Queen. I think we have to go through those kinds of laps sometimes to evolve.
I've also been thinking about revolution. I know, for a fact, documented and all, that change only comes politically when it is in the elites best interest. We got the New Deal under Roosevelt because socialism was a real live political threat. Parties were organized, candidates were running. Rather than loose everything to the collective, certain factions of the elites realized that they must evolve or die. Certain other factions of the elites were, uhm, less enthusiastic. But the real pressure to change was the threat of losing it all.
We don't have that kind of pressure to wield yet, people in general are still a bit too shell shocked from the new Great Depression. They may intellectually know that this is not the end result of personal failures, at least for themselves. But they are still holding on to outdated and false ideas of how success works. Soon, if we on the progressive side can stop acting like a herd of cats, we may have an opportunity to crack this country straight down the class divide. We have to be there, ready, when the entire American populace has it's epiphany moment and realizes "neither party treats me very well" or "every time we elect a new leader we end up worse off".
But that opportunity only comes if we let them be human, both leaders and regular folks alike. We must be willing to praise them when they are right and criticize them when they are wrong. But most importantly, like disaster capitalists, we must be ready with new ideas to push forward when that epiphany happens, and we must make ourselves a real and undeniable threat to the current power structure. Change will never happen otherwise.

Posted by The Red Queen at 5:01 PM No comments:

Art Blogging, cause it's been a long ass time

It's not even so much that I choose to write only about women as a feminist who wants to promote the artwork of other women, though that is part of it. But before I can even get to the analysis of a piece,or even to scrolling down to see if the name of the artist if familiar, it has to interest me. And the art of most (but not all) men is trite to me, before I even know the gender of the artist. It's been done, it's not a new or unique point of view.
So when I stumbled onto these pieces by Amedeo Palazzi, I was gape-mouthed. I don't know anything about the artist. He could be a raging dickhead. But with just a few paintings he turns the male gaze backwards on itself. 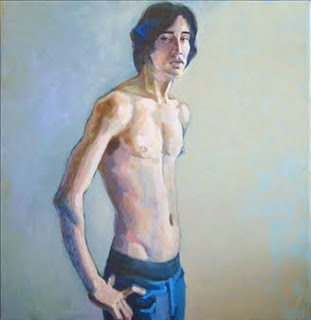 Martino 2006
Here's a very thin man, making the hunched shoulder broken doll pose that has become so popular in fashion magazines. He's sleepy eyed, with the slightly opened mouth that is ubiquitous to female models. He's posed with a 3/4 view of his face, not with a dead on stare. The painting is undeniably sexual because he has been posed in a very traditional pose for women who are meant to be looked. There isn't really a male equivalent of a sexy pose (which is why playgirl always seems so much like an underwear catalogue that forgot it's product). 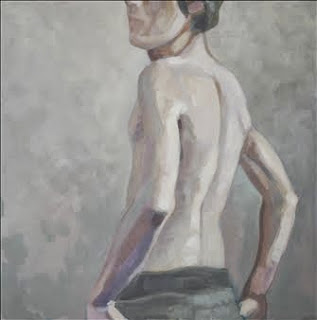 No Title 6, 2008
This is a classic use of female sexy pose. The head is even cut off, in the middle of the over the shoulder pose. If this had been a painting of a girl or woman I would have breezed on by, just another in a hundred thousand views of teh sexxay is teh art. But it's a guy, and guys aren't supposed to be the vulnerable ones in our view.
Perhaps none of this is the artist's intention. But intention, as we well know from feminism 101, doesn't matter. This is what women are posed like all the time, on billboards and beer ads and all sorts of shit. But because it's so universal, we don't even notice it. Switch the genders though, and a semi-clad guy in a painting shows all those little subjugations as bright as neon.
Posted by The Red Queen at 10:33 PM No comments:

Updates from the family compound- Or good news and bad news

1) We finally have real, true, all our very own and not a stolen wifi signal set up again. It only took one dickish installer, an hour and a half on the phone with a nice lady at comcast who suffered through my little mini meltdown (I haven't slept, the wireless router hates me, the comcast modem hates macs, etc) but I have done it. As the ugly American screamed at a french firefighter in Paris- "SUCCESS!"

2) Other Cousin got her tax statement back from the IRS (remember all the tax paperwork I was buried in last September?). We were seriously worried because the IRS had told her that she owed something like $200,000, a number so large that we would just have to surrender the family compound and all live in the van. But yay! The total tax owed is $20. Twenty bucks. Easy peasy.


The Bad News (well not really bad, but humbling)

I am the Bridget Jones of academia. Instead of being a singleton in the realm of smug marrieds, I am the community college drop out in the land of phD candidates. This wouldn't be so bad if it was just the ever brilliant Ruthzilla, I couldn't imagine her doing anything but succeeding.

No, the ego smashing comes when a girl I helped in English 101 to write term papers is now getting her phD.

Slackers of the world untie, or unite, or something.
Posted by The Red Queen at 4:39 PM No comments:

So my darling Auntie is also a writer, and a damn fine one when she gets around to it.

But she needs some encouragement. 2 blog posts in several years is some kinda procrastination. So if you have a wee minute or two, you should head on over to Some Days Are Longer Than Others and say a nice hello.
Posted by The Red Queen at 2:39 AM No comments:

So fucking sorry for you

By now you have hopefully all seen this

which is a response to this superbowltastic bit of man-wallowing

I just have a few things to add

I will continue to feed/house/clothe/educated/and care for your children after we split up, while you whine about the child support you're not paying for the kids who have your last name

I'll let you talk over me, interrupt me and babble on at me about things I have no interest in and will take it quietly when you joke about how women never stop talking

Or maybe I won't. Singledom is a heck of a lot easier.
Posted by The Red Queen at 4:55 PM No comments: