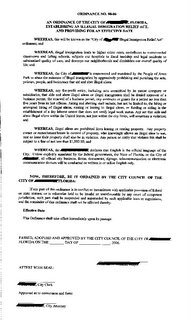 So, the mayor of my charming little adopted hometown of about 8000 decided that the city needn't bother to speak the native language of about 1/5 of its residents... you know, the ones who do most of our agricultural work (in a county whose economy is largely based on citrus and other fruits & vegetables which need to be harvested by hand), a big chunk of our construction, and a whole laundry list of other back-breaking, no-respect, low-paying jobs.

The "Illegal Immigration Relief Act" was copied almost verbatim from a similar ordinance passed in Hazelton, PA, and would have, amongst other things, declared English the "Official Language" and the only language the city does business in. In a recent TV interview, the mayor seemed unconcerned that this could pose a problem for pesky little things like reverse 911 notices (in a town with an air force bombing range recently approved to use live ammunition)

It also would penalize property owners & landlords for knowingly allowing an "illegal alien" (Interestingly enough the US immigration website uses this term, but does not have a definition in its glossary - yes, i know, it's a commonly understood term, but it's a vague term to be used in a piece of legislation without providing a definition) to rent, lease or "use" their property. (just in case the landlord decides to let somebody stay without paying rent?)

The city attorney spoke to a local newspaper, saying the law was poorly written and probably unconstitutional. He's now looking for another job. No "official" reason was given why he was fired, but a council member was quoted as saying it was due to a recent "embarrasing incident"

When I started this post, this measure was up for a vote: After a five-hour city council meeting, the vote came down at 11:00 monday night, failing 3-2 the same margin by which it was originally expected to pass. One councilwoman changed her vote to no, commenting that she had prayed for guidance.

I'm not foolish enough to think that illegal immigration isn't a problem, but I don't think the solution lies in passing wrongheaded ordinances that appeal only to prejudice and snobbery.
Posted by Wonder at 11:53 PM No comments: