Pandagon has got a post up about the censoring of language by the FCC. I think it's a complete load of bullshit that "fuck" is uttered a in millions of homes everyday but never on network TV- cause we must protect the children.

So of course- the "we must protect the children" dipshits come out.

I have always taken the view that exposure and explanation is better than walling a child up in a candy frosted land of pure thoughts. This applies to:

Sex education: sex happens- if you make me a grandma before I turn 50- I'll kill you, use a condom, make sure that both sides enthusiastically consent.

Violent video games -it's fun to play a warrior hero in a game, but that is fantasy and violence is not heroic in real life. In real life people really get hurt and die and it's much harder to figure out who the bad guy is.

Cuss words are earned in our house. That means that it needs to be something bad enough to warrant a cuss word. A six year old doesn't usually have anything terrible enough to warrant a cuss word. A twelve year old may have a few things, and the Kid gets to test out usage with me without fear that I am going to fly off the handle. There are a few rules though- he is never allowed to use words that insult groups of people that he is not a part of- meaning the only racial slurs he would be allowed are cracker or honkey, and since he has a penis he doesn't get to call someone a coward by calling them a pussy (Hello! They push babies out of pussies- nothing cowardly in that!)

In an effort to bullyproof the kid, we run through things that would be appropriate comebacks to teasing. Those comebacks cannot be racist or sexist or ableist and since they are highly likely to be used at school, can only contain cuss words in foreign languages. He can call someone an asshole in Russian, for that I am proud.

But what does this have to do with the "But what about the children" language police?

Last summer, the Kid was walking up to the grocery store when 3 other kids stopped him and tried to rob him. They pushed him around, hit him and wanted him to give up his money. His response was "Fuck off".

He came home, we called the police. The other kids were found and their defense was "we tried to rob him but he cussed at us. "

Let's see- trying to rob someone= actual crime (in this case, because they hit him it would have counted as a felony even though they didn't get anything out of it), responding to a crime with "fuck off" = not a crime and a completely reasonable response to the situation.

Somehow we have kids who think that it is just as bad to cuss at someone as it is to rob them. Either cussing is being highly overestimated in it's criminality, or we have some fucked-up value system. And it wasn't just the kids, when the officer came back and told me what had happened (which I already knew from my kid) he expected me to be shocked by the "Fuck off". When I said "Fuck off is a pretty appropriate response to that situation, don't ya think?" he had to think about it for a second but he agreed.

So I think that I will teach my kid that cussing is ok but robbery is not.

(Endnote- while we could have prosecuted the kids, I don't generally think kid jail is a good idea. Instead I asked the officer to scare them and their parents really bad with the idea that we could press charges of felony robbery for what they did. Kid hasn't had a problem since. )
Posted by The Red Queen at 4:07 AM No comments:

There's been a bust of immigrant workers at a food processing plant in Portland, Oregon.

Details are sketchy, but I wonder if this will be another New Bedford?

There was also serious fallout from the detention of hundreds of workers: Dozens of young children were left stranded after their parents were rounded up by federal authorities. As a result, many children weren't picked up from day care or school.

Corinn Williams, director of the Community Economic Development Center of Southeastern Massachusetts, estimated about 100 children were left with babysitters or caretakers.

"We're continuing to get stories today about infants that were left behind," she said Wednesday. "It's been a widespread humanitarian crisis here in New Bedford."

Let me get this straight- if you're an American citizen who has kids but can't get a job then you are a useless waste of space and you and your kids don't deserve to get enough to eat (see food stamp challenge) but if you're an illegal immigrant who is working you are a criminal for having a job that puts food in the mouths of your children and it's better that they should be left stranded at daycare while la migra holds you hostage.

Or shorter US Government "Poor people and their children don't get us reelected but raids on poor people do".
Posted by The Red Queen at 6:12 PM No comments:

Im in your court order- dissing your privilege 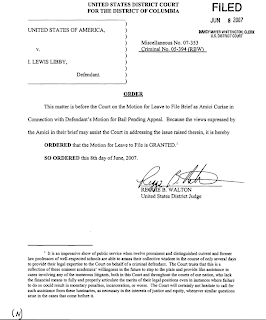 Let's see, a bunch of hifalutin law types including Alan Dershowitz and Robert "I'm all for tort reform till I want to sue someone for a million dollars" Bork get permission to write an amicus brief to get poor little Scooter Libby bail. (What Scooter, jail to hard for a pisshead like you?)

Take special care to read the footnote. It made my day! I knew courts could be tough but this is flat out bitchtastic!

PDFs of the originals can be found here. Click where it says today's order.
Posted by The Red Queen at 5:50 PM No comments:

No healthcare for you cause you're a fat bitch!

I am seething in rage right now. The mother of my best friend has been suffering from chest pain and shortness of breath for weeks. She has been to the emergency room 2 or 3 times a week, several times in an ambulance, convinced that there is something major wrong because it feels like a bag of bricks was dropped on her chest and she can't get any air.

But instead of treatment- she gets treated like shit. The ER cardiologist refused to see her because "she's just fat". The woman is not a sylph, but she's smaller than me and even if she was fat that doesn't mean she deserves a heart attack.

She has finally gotten an appointment with a cardiologist on her health plan (Kaiser- so you know it sucks) and guess who the cardiologist is. It's the ER guy who thinks she's just too fat. They are going to run a bunch of tests but they aren't sure they can get accurate results because her "boobs are too big".

You think it might be treatment like this that explains the wicked disparity between heart attack rates in men and women.

If they weren't 1200 miles away I'd be in that doc's office making him cry (I've got experience with that- I fought with my mom's docs for about 15 years).

Instead all I can do is look shit up on the internets. It's hard to be effect righteous anger from a distance.

Any random readers suggestions much appreciated. I know lungs, mental illness, and some other stuff from mom, but hearts are a mystery to me.
Posted by The Red Queen at 3:39 PM 1 comment:

My new favorite phrase has got to be:

You're just gonna have to nut up, and be Jesus.

And I totally had Karen pegged as a wool licker.
Posted by The Red Queen at 7:29 PM 1 comment: