September 23rd to 30th is Banned Book Week. Click the link and read all about it. I made an icon to support Banned Book Week on my site, and also shown here if anybody wants to use it. Post it on your blog and please mention that you got it from here.

"Intellectual freedom can exist only where two essential conditions are met: first, that all individuals have the right to hold any belief on any subject and to convey their ideas in any form they deem appropriate; and second, that society makes an equal commitment to the right of unrestricted access to information and ideas regardless of the communication medium used, the content of the work, and the viewpoints of both the author and receiver of information. Freedom to express oneself through a chosen mode of communication, including the Internet, becomes virtually meaningless if access to that information is not protected. Intellectual freedom implies a circle, and that circle is broken if either freedom of expression or access to ideas is stifled."
Posted by jovial_cynic at 7:42 PM 3 comments: 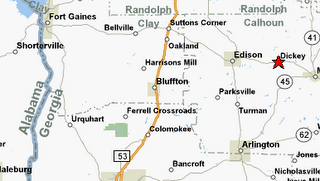 Some who really know me, know that DeeK, comes from my last name, Dickey. See that star on the map, near the Alabama, Florida state lines? That's Dickey, Georgia. I'm told Mason jars originated from the plantations there. What do I care?

My father's side of the family started in America there, but why should I care? I know the male side of the line goes back to a Dickey family from England. Dickey, Dixon, Dickinson, they all names that go back to Richard III, a popular king. Yeah, you know, I don't really care.

You see, the woman that my distant male relative raped will always be a nameless woman, who got some extra privileges, for bearing a mulatto child to some man who used a whole bunch of nameless slaves to pass the Dickey name down through history. Google "Dickey", follow the links and you'll be there for a couple days. But her? She will always be a nameless woman, scared to hell in a strange land, lucky to have survived a voyage across the Atlantic where pigs and cattle got better treatment than she did.

Do I celebrate being a Dickey? Hey, look that's the plantation where my great, great, great, great, great grandmother got her ass whipped. Where she was raped and maybe got to be called a house nigger, for the pleasure of having a baby, who was shunned for not being white enough to be worth anything. Yep, that's my family history or one side of it.

Please don't tell me that the civil rights movement is over. Don't tell me that your white guilt is my fault. Don't tell me that were all equal now. If had lived in New Orleans in 2005, I would have been in the Superdome. Or on a bridge. Or on in the Convention Center. You see, I don't have a car. Don't want one. Most of the time, don't need one. But it would have been my fault that I didn't leave town. It would be my fault, that I would have to live in a formadelhyde FEMA trailer, unable to speak to the press. Unable to get a job, because I am not a white Dickey, who may work for Halliburton. It is my fault the levees broke and that the wetlands could no longer blunt the force of a hurricane.

Please don't tell me that you are a minority because you are a white male who gets dumped on now and again. Don't tell you can't figure it out. It's all in front of you.

bubbles and not butts

I responded to a post about the housing bubble on the Seattle PI (as wsdeek) with the following:

I think the housing and the dot-com bubbles show that our economy is built like a house of cards.

What tangible goods do we really produce?

Who among us besides the top few percent really own something we can hold on to?

If China were to stop accepting our debt, where would we be?

How many of our jobs can be done in another part of the world for far less money?

How far beyond about three paychecks would most of us be able to live?

What support systems do we have in place if we cannot find the next bubble?

Why am I asking these questions?

Because we really need to figure out what we have become and how strong our country actually is and what game plan we should choose if the answers are less than favorable.

I have one more question:

Why shouldn't I be able to ask these questions without someone asking me why I don't leave my country, if I don't like the answers to the questions above?

Any questions?
Posted by DeeK at 11:48 PM No comments:

As some of you know the shit has hit the fan at the RQ castle and every day I find myself in some new battle threatening legal action. For example, after not being paid for weeks I had to send an email to every single administrative head threatening a lawsuit for their repeat violations of federal law. Then I fought with my bank manager when the bank put a hold on one of my deposits. I pointed out how it was in violation of federal reserve law to hold that type of deposit. He said "I've been in banking for over 12 years and this is the first time a customer knew more than me". He apologized and fixed it, but not after bouncing a check. I haven't bounced a check in 5 years. Fuck.

So this is what I'm doing, everyday. In this case, the personal is political because everyday I find myself having to inform people who should know better what the laws governing their jobs are. I should so get an honorary law degree for this shit.

I am back to work maybe next week and I should have some time and space to write. I do miss you all, but sometimes you've got to hibernate when things are rough.

I got into a recent debate on a friend's blog regarding the nature of Hate Crimes, and why such a classification even exists. He, being a US Marine, felt a bit of injustice at the fact that harassment of military personnel isn't viewed as a hate crime... because it's stemmed from hate as well.

I explained that "hate crime" laws were established to protect minorities, and minority groups are marginalized by default -- they have less voice in the community than the majority, just by nature of sheer numbers. Less voice means less impact, and that the majority of laws and regulations will benefit the majority, and while utilitarianism seems to be a functional tactic for government, it certainly always sucks for the minority groups.

A counter-argument was presented: On an individual level, we each can petition on our own behalf; we can each go and educate ourselves and get a job, etc., etc. Since one individual is as much of a minority as another, the playing field is level. It's an interesting thought, and in my own case, I see it evident. I'm technically a minority (half-korean, half white), and I view myself as quite successful... but on the other hand, I don't have a collective mindset about my ethnicity. I don't embrace that part of my identity -- I don't think of myself as a part of a subset of the population. A woman might identify with being among "women," and a black man might identify with the plight of black-americans. Such a concept is entirely foreign to me, and I don't feel as though my voice has been marginalized.

What are your thoughts on this?
Posted by jovial_cynic at 4:02 PM 4 comments: 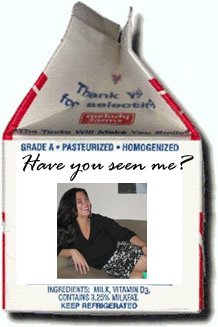