Dine and Dash for the Rich

Matt Taibbi of Rolling Stone came out with a fab piece on the Bush 2008 budget and correlation between the elimination of the estate tax for the country's wealthiest families and cuts to social programs.

I'm not going to rehash his entire article, but for reference, these are some of the disgusting examples he sites:

If the Estate Tax were to be repealed completely, the estimated savings to just one family -- the Walton family, the heirs to the Wal-Mart fortune -- would be about $32.7 billion dollars over the next ten years.

The proposed reductions to Medicaid over the same time frame? $28 billion.

the heirs to the Mars candy corporation -- some of the world's evilest scumbags, incidentally, routinely ripped by human rights organizations for trafficking in child labor to work cocoa farms in places like Cote D'Ivoire -- if the estate tax goes, those assholes will receive about $11.7 billion in tax breaks. That's more than three times the amount Bush wants to cut from the VA budget ($3.4 billion) over the same time period.

Ernest Gallo family (shitty wines) receives a $468.4 million cut while LIHEAP (heating oil to poor) would get a $420 million cut

In typical fashion, the libertarian and conservative yahoos posting comments on blogs that have written about this article are using the same old, tired, untrue arguments.

Whahhhhh, you want to STEAL from dead people!

Whahhhh, rich people earned their money, they should get to keep it.

Whahhhhh, all the money the government gets from taxes just disappears and no good comes from it.

Whahhhhh, those poor people who want social services should pull themselves up by their bootstraps like the rich heirs to trust funds do.

But those are all false. Government services are like food in a restaurant, sometimes you get surf 'n turf with a really good wine, sometimes all you can afford is a hamburger and a coke. But you pay for what you get, or at least you are supposed to. Bushco has been trying to turn that around for years so that us hamburger eaters are paying surf 'n turf prices while the mucky-mucks get their lobster free.

For example, I do not need a trade agreement with China or Mexico and the Doha trade talks won't really do anything for me. But Wal-Mart needs Uncle Sam to go in and get China to whip up some Peking Duck on the cheap. It is not my container ships or trucking companies that need to make sure oil is free flowing so that my goods are too. And I don't need some jacked-up war in Iraq or Iran or wherever we are fighting this week so that I can fatten my pocketbook with military contracts or pilfered oil resources. Those are expensive, steak and lobster level meals that the wealthiest in the country need and need to pay for.

I need healthcare, education, safe water and food, transportation and domestic security. So do you. Those are hamburger meals, nothing fancy. And we pay for them.

Whining that the estate tax is stealing from the dead is ridiculous. When do you pay your restaurant tab? The only time you pay it before you eat is at an all-you-can eat buffet (think socialism) where everybody gets to take what they need for the same price and nobody eats for free. (very simple analogy- but suck it if you've got a problem)

Nope, you pay your restaurant tab at the end of the meal when you know you've had your fill. Those who die with mountains of money generally have had a much better meal than the rest of us. Shouldn't they pay for what they've eaten? What, you think they should be able to pass it onto their heirs instead of paying their government waitstaff? Whose gonna pay their tab then? Whose gonna pay for Doha talks and free trade agreements? What, all the rest of us who gain little to no benefit from such things? Why? Capitalism is supposed to mean you pay a fair price for the goods and services you get. You can't very well go around screaming that capitalism is the best way if your not willing to pay your tab at the end of the night. No dine and dash for the wealthy, they need to pay for what they eat just like the rest of us.
Posted by The Red Queen at 6:21 PM No comments:

Please pull your head out of your ass. I have no idea where you get the impression that women "do not follow politics or foreign policy, and that some, if married, rely on their husbands for political news. Men read newspapers and news magazines for that kind of information while women, in general, do not." But I think it must come from inhaling "exceptionalism" fumes.

Let's see, just today I have read the NY Times, LA times, Salon, numerous political blogs, and obviously the Seattle Times, where you thought it was ok to spew your ignorance. I plan on checking out the Guardian and Le Monde once I am done telling you to shove it. Oh and I read the Economist and Atlantic Monthly because they are both just damn good magazines.

Yes, women are busy. We still do the lion's share of the housework and child care. We work full-time, go to school, take care of elderly parents, etc. All of these things may make us run around with endless to do lists, but they also make us acutely aware of the personal costs of government policies. We know how sad educational funding is because we are volunteering at our children's schools to make up for budget shortages. We know how screwed up the healthcare system is because we make the doctor's appointments. We worry about the current wars and the ones Dear leader wants to start because we have husbands or boyfriends or girlfriends or sons and daughters who already are fighting, or may have to go fight in the future .

These things make us more compelled to read the newspaper, not less. They make us more aware of how personal the political is.

Your argument that women let their husbands do all the news hunting for them is almost as old as the "we can't let the little ladies vote cause it would corrupt them" idea. It should have gone out with the corset.

I mentioned exceptionalism before because you seem to think you are special, one of the few women in a sea of men with enough sense to read the paper daily. You are not so special. Please stop lecturing us women on how we should be more informed and get some actual information next time. You are a journalist and professor, shouldn't you spend more time teaching and writing about facts rather writing idiotic columns with no purpose other than to give you a platform to spew bullshit and make you feel superior?

PS- I have no idea whose Anna Nicole Smith's baby daddy and a large portion of us would like to see more real news and less celebrity sensationalism, or in the case of your column- journalistic hubris.
Posted by The Red Queen at 6:57 PM No comments:

For the last few weeks I've been working on some little cartoons. This is the first one and sadly, the basis for all of these are situations I've actually been in. I need to come up with a name for them, but no reason not to post them for now. 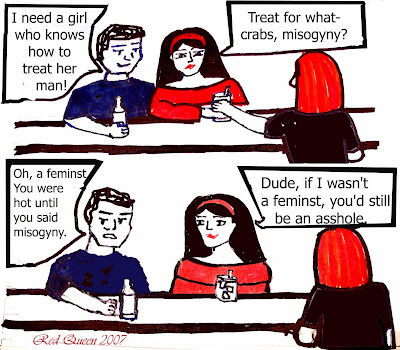 I really hate the phrase "knows how to treat her man". It translates to "Will put up with my whiney little boy demands and not expect me to act like an adult".
Posted by The Red Queen at 2:35 PM No comments: