I Am Hillary Clinton 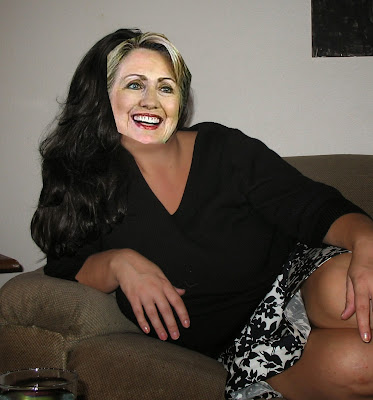 Welcome Shakers! My point with this little post was to try and start a meme where other people write about how the sexism directed at Hillary impacts them too. So if you like this post and it inspires you, drop me a link in comments. So far the other I Am Hillary Clinton posts have been brilliant.

And every time someone makes a joke about her not being able to handle the big red button because she might be emotional, it cuts me. Those kinds of jokes mean that I will also not be taken seriously because I might seem emotional.

And every time someone makes a period joke about her, it cuts me. It just makes it easier for any legitimate issues I may have to be ignored because I might be on the rag.

And every time someone picks on her for getting emotional, it means I will have to keep my emotions in check for fear of seeming weak. If I were a man, my tears would be seen as a sign of the gravity of the matter at hand.

And every time someone accuses her of cackling or screeching, it means I will have to check my own voice and my own laughter so that I don't appear too loud or obvious.

And every time someone declares that Hillary "hasn't had to work twice as hard to get respect", I have to try and forget that my brother and I both work in the same field and he makes more than 10 times what I do.

And every time someone declares that sexism is dead, I have to try and forget all the street harassment and threats of violence I put up with on a regular basis. If there is no sexism, then those men that have never met me must hate me for some other reason.

And every time someone tells me that I am a traitor for refusing to vote against my own self interest, I will forget just how much I have contributed to the Democratic party in terms of time, money and labor.

I am Hillary Clinton, and I vote.

UPDATE: I'm moving this to the top o' the blog and Check out Hillary1000
and Blulyon (who has the best photoshop skills evah!). And once Little Miss random Babble sends me a pick you can check her out too. Lets make it big people! Keep 'em coming.
Posted by The Red Queen at 1:13 AM

Labels: I am Hillary Clinton