My flag decal turned upside down - what I should have said 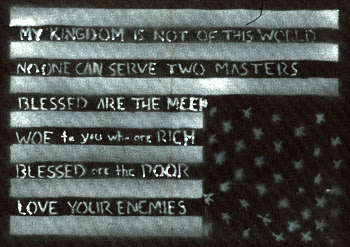 OK, so back around July I posted this image on my myspace page.

As you can see, it consists of a US flag turned upside-down, The writing is quoted from the New Testament - Mostly the Sermon on the Mount - things Jesus said that pertain to being one of his followers, and how that relates to such things as power, money, war, revenge

Now i'm not a "flag-waver" most days (4th of july excepted, and no, I don't think that's hypocritical) but I do believe in the principles that flag is supposed to stand for. I don't think we have any "good old days" to hearken back to where those principles were anything more than a wonderful dream of what could be. But I haven't given up on the good ol' US of A just yet.
In nautical terms, a flag turned upside-down is a distress signal - a sign that all is not well aboard the vessel flying the colors. That's how I interpret this, and how I think many people who are currently displaying the flag upside down intend it. The ship of state has been boarded by pirates masquerading as patriots.

I posted it to get a reaction, and maybe spark some discussion in my small circle
Well, I got a reaction.
One of my friends is a guy I've known for several years. His mom is a family friend, he & Sis went to camp together, and attended the same church for a while, we're both in the same passion play off & on.
He's currently in Iraq, doing "private security". I don't ask, don't want to know, & when he comes home the rich man he hopes to (if he comes home in one piece) I don't know if I'll ever be able to look him in the eye. I don't think I want to see what I think I would see there.
He sent me a message, asking me to take it off my default picture, saying it was "disrespectful" to those who have given their lives defending it.

I moved it from my default, out of respect for my friend, and shared some of my thoughts about why i had it on my page. I challenged him to consider the "religious wording" (his phrase) in the image in relation to some of the polices that were being promoted under the flag.

And I asked him about something he had posted on his page about all things being fair in love and war.

He replied with the complaint that the war was so politicized that they can't do their jobs as effectively as they could if they could, say fire on civilians instead of worrying about offending the Muslims, who want us all dead, and how pulling out of the war now would mean that those who died already will have died in vain.

Now this is a guy who's over there. now. in the middle of this hell. He's there by his own choice, and being handsomely compensated (PSCs make in a month about what the average soldier makes in a year), yes, but in more than one way, he's family. On the one hand, I want to shake him up with just what kind of evil he's actively helping to perpetrate. On the other hand, I don't want to mess with his head in a way that could literally get him killed.

So I told him that i wasn't going to argue firehouse politics with a man inside a burning building. That I hope he gets home safely, sooner rather than later.
And I can't help feeling that in that agreeing-to-disagree, I have failed my friend, and the cause of peace, and God.

I can't help feeling there's more I should have said.

I SHOULD HAVE SAID that I fear for his soul.

Kyrie eleison. Christe eleison. May God have mercy on us all.
Posted by Wonder at 3:37 AM