Much is said in this country of being able to make it on your own. But nobody ever becomes a success soley by their own means. The number one indicator of a person's future economic status is the economic status of their parents. Social mobility or being able to move up in class levels is just another ficticious part of the American Dream mythology that both Deek and I are trying to dissuade you from believing. Every now and then a token is allowed to succeed (Oprah is a good example) just to give the rest of us false hopes that it can be done by anyone.

From even before we are born, social rank plays a huge part in how successful we can be. When our country is in a more socially generous mood, we talk about leveling the playing field or creating equal opportunity, but these are usually half-ass measures that create more bureaucracy and provide little gain (No child left behind) or if there is a successful program (Headstart) it is gutted and restricted to do the least possible good. 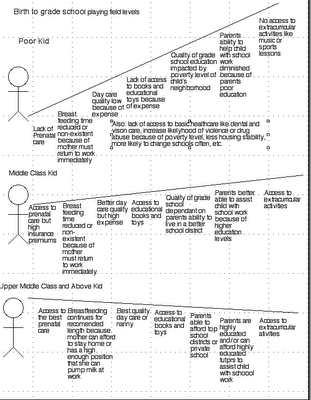 So I created this handy little graphic to give you all an idea of how uneven the playing field is just from birth to grade school. You can see how the slope is very steeply inclined for the poor, still inclined for the middle, and it doesn't just even out but gets easier for the wealthy (because for the wealthy there are enough resources to make the playing field not just even, but to give the ball some extra spin in the right direction).

Now imagine these inequities continuing on through college. The slope increases exponetially. If a family cannot afford a few hundred dollars a year in dental care then there is no possible way for it to afford $20,000 in college tuition. College actually becomes even more difficult for the middle class, who lose out on pell grants because of income limits. For the wealthy, admissions to top colleges are easier because colleges are more likely to admit a less capable student with the ability to pay full tuition than a more capable student who requires a scholarship.

I think (or at least I hope) that we can all agree that what class a child is born into is not the child's responsibility but is rather the result of luck. A fetus does not have the ability to schedule prenatal care, a newborn cannot breastfeed itself, and a kindergartner can't pick which school district to live in. Most importantly, leaving all ideas of religion or destiny out of it (because this is social science, not Sunday school) children don't get to pick their parents. Their lot in life is entirely a matter of chance.

There is a point when an individual needs to take responsibility for their own lot in life as an adult, but we generally thrust that responsibility onto to people just when the slope gets steepest (college) after having done little to nothing to give the majority the tools to change their lot. There are a number of changes we could make to even the playing field. We could start with universal healthcare, paid maternity leave so all mothers could breastfeed their children for the recommended period, increased daycare standards and subsidies, making public universities free, providing more tutoring assitance in primary education, etc. But instead we give more tax breaks and increase military spending.

Actually, the tax breaks and military spending make sense if the idea is to keep the playing filed uneven. It gives more money to those who don't need help and it creates an option for those at the bottom that those at the top never take- joining the military for college money.
Posted by The Red Queen at 5:00 PM

I agree that mental health issues are a huge part of it, but the chart is specific to small children. I could point out that most drug and alcohol addictions stem from self-medicating for mental health issues and that it is less of a problem for people with adequate insurance and access to a good doctor and drugs.

Mental Health is a whole 'nother SET of charts... where do you want to begin...?

however, issues such as anxiety, ADD, depression, do often manifest early in childhood, with major impact on their "educational opportunities"

That's what I get for being vague. I should have more specifically commented on the mental health of the parents and supporting structure raising the children. Their mental health, which will leave fundamental impressions throughout life, under all the other pressures you detail, will be tenuous at best and largely undiagnosed. I think this is a hidden element that gets passed on generation after generation.

Ironically, in American culture at least, this lack of attention to mental health also get passed on at all income levels. GW is good example. The difference is that among the privledged classes, once problems are diagnosed, the resources for recovery are more readily available

Wonder actually has a really good point. Poor kids with ADHD or depression (or in my kid's case, a neurological disorder that interferes with motor skills) are more likely to be looked at by teachers as behaving badly or being lazy than having an undiagnosed medical condition. rich kids will have teachers who are better informed and catch that problem sooner.

It should have made it onto the chart- but there's no room.